Every two years, members of the New Jersey State Federation of Women’s Clubs of GFWC (NJSFWC) throughout the state support a defined special project with fundraising, in-kind donations and public awareness campaigns. NAMI New Jersey has been selected as the Special Project for 2014-2016, offering an extraordinary opportunity to educate all communities across the state about mental illness and its impact on individuals and families through Club activities and initiatives. In addition to making the range of NAMI NJ programs and activities (from school mental health outreach to family education) available to the clubs, NJSFWC and NAMI NJ are working together to develop special activities focusing on the arts, conservation, home life and public issues.

Founded in 1894, the NJSFWC, a member of the General Federation of Women’s Clubs, provides opportunities for education, leadership training, and community service through participation in local clubs, enabling members to make a difference in the lives of others, one project at a time. There are approximately 8,000 members in over 230 clubs located throughout New Jersey. Each member inherits a history of activism on the community, state, national and international level. Previous Special Projects include the Valerie Fund, Canine Companions for Independence, the Community FoodBank of New Jersey and its state-wide affiliates, and the New Jersey’s domestic violence shelters and their client families. To learn more about the NJSFWC visit their website at http://www.njsfwc.org.

– Ginger Siefring, Vice President and Secretary of NAMI Somerset, and Lorrie Baumann, NAMI NJ Director of School Programs, conducted a presentation to 42 members of the Women’s Literary Club of Bound Brook on January 11, 2016.  The Bound Brook Women’s Club has been a  member of the NJ State Federation of Women’s Clubs since 1895. Ginger and Lorrie spoke about the programs and support and advocacy groups that NAMI NJ conducts throughout New Jersey. Read news article here.

– GFWC Woman’s League of Mount Holly is proud of their “little garden” dedicated on December 4th. Ruth Stotsenburg and other NAMI NJ people attended and made their garden dedication very special. Several other people attended, including the Mayor of Mount Holly. Woman’s League members, NAMI NJ members, and the Mayor all spoke on the importance of recognizing such an event. They intend to continue weeding and presenting the garden in a beautiful manner and plan to plant forget-me-nots in the spring for all walking down Cross Creek Alley, Mount Holly, NJ to enjoy and think about the message the garden sends. 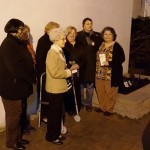 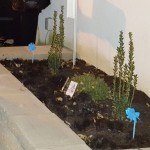 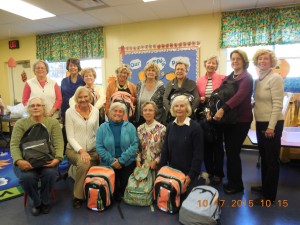 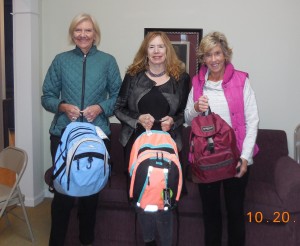 –  WCTT ‘A Taste of Glamour’ to include Bloomingdales of Bridgewater, Sherman Jewelers and Markirk Salon

– Sparta Woman’s Club Supports Our Military
– In observance of the Mental Illness Awareness Weeek (October 4-10, 2015), the Woman’s Club of Cranbury held a sale of seed packets and pins, and arranged an In Our Own Voice presentation on October 7, 2015. Read article on centraljersey.com, Cranbury: Growing Awareness about Mental Illness. 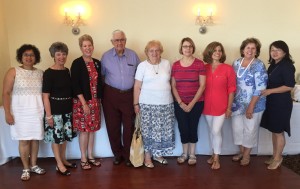 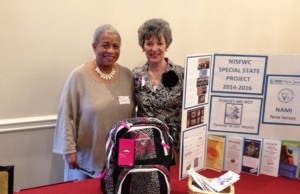 a proclamation proclaiming the month of May 2015 as Mental Health Month during which time he encourages efforts on public awareness and education related to mental illness.

– Jill Passaretti, President, and Vivien Finn, Special State Project Chairman of the NJSFWC, announced that the NJSFWC would join NAMIWalks NJ in 2015 as a Gold Sponsor by contributing $5,000. NAMI NJ is proud to be associated with a distinguished organization with a proud support of grassroots advocacy! 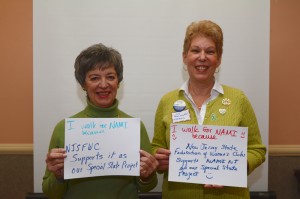 – The third annual pancake breakfast, sponsored by the GFWC Woman’s Club of the Denville-Rockaway area, was held the Sunday prior to Veterans Day 2014 at Applebee’s in Rockaway Township. Read more…

Forget Me Not Pin

– At the Millville Woman’s Club first card game a basket was raffled off for the National Alliance on Mental Illness of New Jersey which is the club’s statewide charity for two years. NAMI is a support, education and advocacy group that helps people with mental illness, families and friends of people affected by a serious mental illness. Read more…

– With the winter holidays just around the corner, the Woman’s Club of Morristown is holding its annual Holiday Bazaar fundraiser to benefit NAMI NJ on Nov. 21 and 22, 2014 at its headquarters, the Dr. Lewis Condict House, 51 South Street, Morristown. The sale will be open from 5-8 p.m. on Friday and 9 a.m. to 5 p.m. on Saturday. More info… 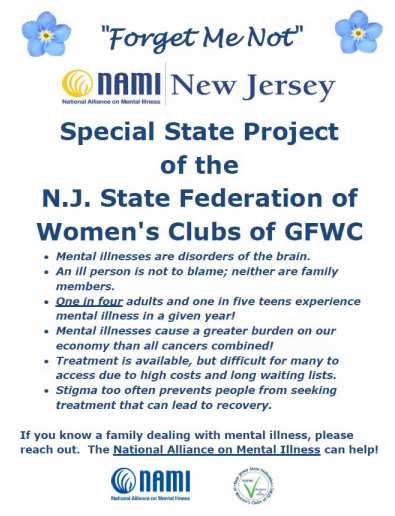